How to get to Mount Bromo by yourself.
Avoid the scams!

A long journey, full of hurdles, to the most rewarding view in Indonesia! 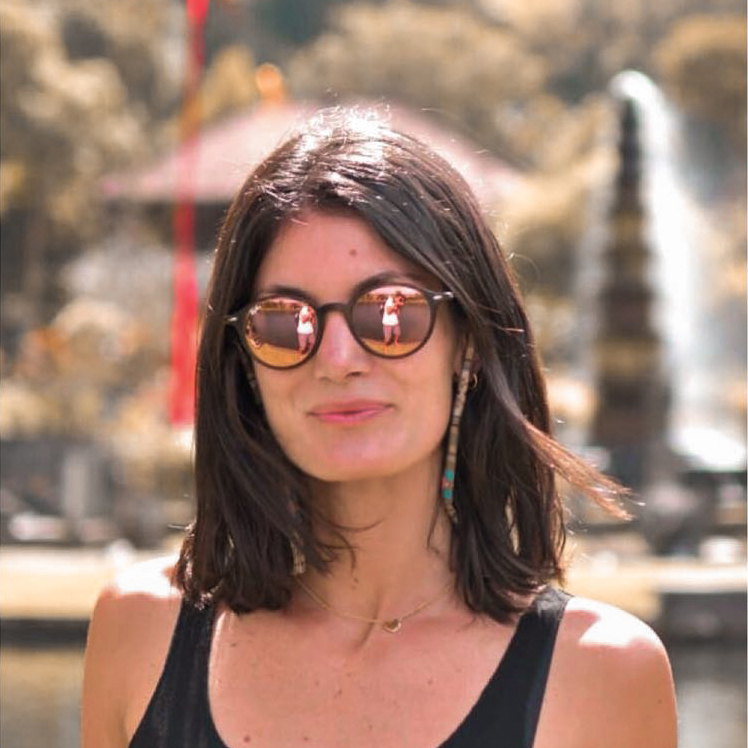 Sometimes, the harder it is to get somewhere, the better the feeling once you reach it. And this was without a doubt the best example of it.

We’d read a lot about how to get to the most famous crater in Java, and we’d decided to do it on our own instead of hiring a guided tour, which we knew wouldn’t be so satisfying.

Is it worth spending nearly two days travelling back and forth for a few hours at Mount Bromo?
Well, in our opinion it is! The path is also part of the experience, not just the destination.
We are not too keen on guided tours, where someone will pick you up at your hotel door, and drop you back on the next stop without even getting dirty. We love the backpacking experience of diving into a country’s lesser know areas and find your way to your destination by yourself.
For this one, we had to take a train, a taxi, a bus, and a van in order to reach it. Here is a step by step guide on how we did it: 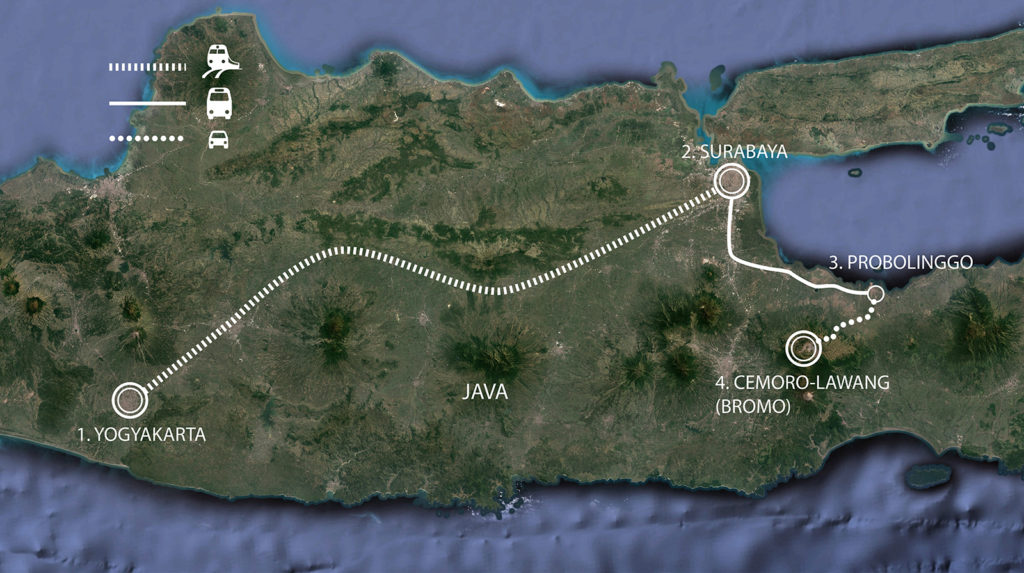 First advice: book this train in advance!!. We booked it on Tiket.com a few days earlier (not without struggling with the website a bit, since the english version is quite incomplete); and went to the station the day before to get our boarding card printed in the self-check in machines.

Make sure you wear some warm clothes for this train ride. Indonesians love their AC really really cold!

Arranged with our host in Yogyakarta a taxi pick up at 6am for just 40.000 IDR (only 2,5€). The train itself was quite good and comfortable, full but not packed, with people who seemed to be going to work to Surabaya. Had breakfast on the train while admiring the mix of landscapes, from vast agricultural regions to big cities and industrial areas. Had enough time on the train to edit a short clip of our stay in Yogyakarta. Check it out here!

Here’s where things start to get interesting! Once you arrive at Surabaya Gubeng, the main train station of this big city, get ready to be assaulted by tens of drivers trying to take you to your destination (even to Mount bromo itself if you want to!). Make sure you don’t pay too much attention to them, even if they seem offended, and start looking in the parking lot for the blue taxis, which are the only official ones with a meter. Otherwise, yo may end up paying more than double the fair rate. We paid 85.000 IDR (around 5€) for the ride, but we were asked for up to 160.000 IDR by the «pirate» drivers.

Important!: Surabaya is a pretty big city, with plenty of bus stations, so make sure you are taken to Bungurashi Terminal.

Once at the station, everyone (literally, everyone) will  start asking you where you are going, and even screaming from across the station hall to get your attention. They’ll know you are trying to get to Bromo, but no need to say it out loud if you don’t want them insisting a hundred times that they’ll take you there cheaper (which is of course not true). In the end, someone will help you reach the correct bus if you ask the right people, but make sure you ask the driver if that’s the destination and what the price is. The station is huge and you probably won’t find it by yourself. We departed from platform 5 and paid 60.000 IDR (3,60€) for two tickets. 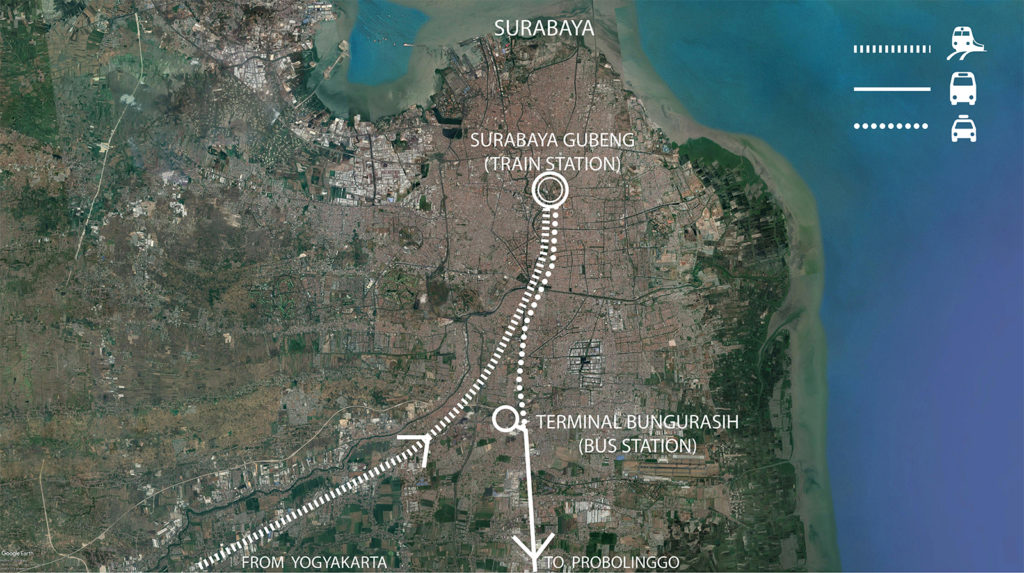 If you thought finding your way across Surabaya and its stations was not the easiest thing, Probolinggo will make your blood boil!

The bus ride itself was not too bad, with parts of it on a good highway still under construction. However, it stopped in weird places, or rather just opened the door while it slowed down, for vendors to hop on the bus and sell you snacks, which wouldn’t really bother us except when they brought along a friend who would just sit next to you and stare at your backpacks before hopping off at the next corner. Still, this was the good part.

Be very aware! Once the bus is entering the Probolinggo area, a few guys, with a pretty aggresive attitude, will get on the bus and spot all tourists (which at this point are clearly going to Bromo). They’ll yell and try to convince in all ways imaginable that you have to get down with them at the next stop. DON’T DO IT! You can read about this scam in almost every blog out there. You’ll get down at their shop, where they’ll offer you a ride to Cemoro Lawang for  a way higher price than it actually costs. And once you realize the scam, your bus is gone and you are left with no choice but to either take it or walk a few kilometres to the actual station!

Make sure you get off at Terminal Bayuangga. It’s quite useful to either have a data connection, which we decided we could live without, or to have some offline maps downloaded on your phone. That’s how we checked we were at the right place.

The story doesn’t end here, of course. Once you get down at Bayuangga, you’ll have to walk out of the station while dodging again all sorts of people offering you all kind of rides up to Cemoro Lawang (bikes, private cars…) and walk a couple minutes left (towards the mountain, so to speak) until you reach a row of food stalls and small shops. You’ll spot some colourful old vans parked. These are the ones that could take you there for the right price… But notice we said «could».

In our memory, Probolinggo will always be this awful place where local people try to scam the few tourists that pass by. Far from the kindness of almost everyone else in Java…

Now at this point, luck and timing will play a big factor. Most vans will have left if you arrive after 3 or 4pm, and they only leave when they are full. So if you are lucky and there were other travelers on your bus trying to get up to the crater, you can agree on a price and go straight up. If you arrive later and with not many more tourist, the van crew (a bunch of local guys playing around with their motorbikes and laughing at you poor tourist) will ask you to pay the price of the whole van, which should be around 500.000 IDR (30€). A crazy high price for Indonesia.

We had to wait around for nearly three hours, and try to negotiate with them in a very poor english. When it was already dark, and we’d gotten the price down to 400.000 IDR for 3 people (just one other tourist was with us), a Ukranian couple come to save our lives. We had to pay the 500.00, but between five of us and finally left Probolinggo.

The ride up will make you think the van is about to collapse; the road is tricky and in not great condition, but as it got darker and colder, we finally reached the small town perched on the edge of the amazing caldera!

We checked in at our guesthouse (luckily we’d booked it in advance, since we arrived quite late to start walking around knocking on doors) and went for a quick dinner at Lava Cafe. Despite not going to bed as early as we’d have wanted to, given the circumstances and the fact that we had to start our trek up at 3am, we had a shor but good rest.

Keep reading about our incredible next day at Mount Bromo on the next post. All the struggles were worth it!

And f you want to know more about our accomodation choice in a place like Cemoro Lawang, with not a huge offer and definitely not a luxury destination, head here!

Nightmare in Kenya! PART 3 – Get us out of here